Spiritfest is the Grahamstown Churches’ initiative in the National Arts Festival.

The National Arts Festival 2021 took place online from 8-18 July, and Spiritfest was part of it!

Return to this year’s Spiritfest programme.

Spiritfest exists to glorify God and to celebrate the Arts in the context of the Christian Faith. If you have enjoyed one of our programme items, and would like to make a contribution towards the expenses of Spiritfest, please send your gift by e.f.t. to Cathedral of St Michael & St George Current Account, First National Bank, Grahamstown, Account Number: 52320792164, clearly marked Spiritfest.  For videos from past Spiritfest events, please visit our Spiritfest Videos page, or go directly to our YouTube channel. 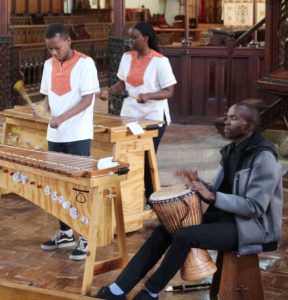 From the beating of the drum to the singing of the marimbas, directed by Asakhe Cuntsulana, do not miss out on this energy-filled experience with St Michael’s Marimbas, recorded at the Cathedral of St Michael & St George in Makhanda. Now available on our YouTube channel. Asakhe Cuntsulana is the Director of Marimbas at the Cathedral of St Michael & St George in Makhanda. He has a BMus (Music and Ethnomusicology) from Rhodes University, and is continuing his post-graduate studies at Rhodes. He sings, and as well as the marimbas plays the piano, adungu and African drum among other instruments. The St Michael’s Marimbas players are a group of enthusiastic and talented young people, mostly attending local schools, who play regularly at services of worship in the Cathedral.

Fr Anthony Egan interviewed Mignonne Breier on her book: Bloody Sunday: the nun, the Defiance Campaign and South Africa’s secret massacre. The book covers the life, death and memorialisation of Irish nun and medical doctor Sister Aidan Quinlan, as well as the social and political context in which she lived and worked in South Africa, the circumstances that led to her murder and a police massacre on 9 November 1952, and the ongoing impact of her death on the Duncan Village community.

Mignonne Breier is a former journalist, lecturer and researcher. She retired from UCT in 2019 but remains an Honorary Research Associate in the School of Education at UCT and a consultant on researcher development. She grew up in the Eastern Cape (mainly Grahamstown/Makhanda) and has been conducting historical research there in her spare time for the past decade. Bloody Sunday is the culmination of that research. She also writes short stories and poetry and is the author of the 2013 Letters to my son (Kwela).

Anthony Egan SJ is a Catholic priest based in Johannesburg, where he works at the Jesuit Institute South Africa and the Steve Biko Centre for Bioethics, University of the Witwatersrand. The author or co-author of a number of books, chapters in books, journal and newspaper articles, he is by training a historian, political analyst and moral theologian.

The interview took place live on Monday 12 July at 14h30, via Zoom. Some members of the audience were even in Ireland! The interview was recorded, and can be accessed on our  YouTube channel.

Keith Matthee: ‘The Emperor has no clothing’, the fight for the unborn in South Africa.

Since the launch of his book, ‘The Emperor Has No Clothing’, it has dawned on Keith Matthee that whilst in his book the emperor is the South African Constitutional Court, perhaps the real emperor is the established church in South Africa. In terms of official statistics, some 500 unborn babies are being intentionally killed every day in South Africa. Using his book as a launching pad for his talk, advocate and author Keith Matthee will detail his fight for the rights of the unborn child in South Africa, involving amongst other things the Constitutional Court and the church’s response to this critical moral issue. To hear this lecture on YouTube, Click here.

In his book of the same name, Keith Matthee quotes a verse from a Pink Floyd song “Comfortably numb.” At one point it goes:

My hands felt just like two balloons Now I’ve got that feeling once agin I can’t explain, you would not understand This is not how I am I have become comfortably numb.

Matthee’s challenge is to all people, whether they accept or reject Jesus, whether they are inside or outside the church. It poses the question to them whether in their picture of and response to Jesus they “have become comfortably numb” as a strategy to avoid radical consequences to their lifestyles of following the Jesus of the Gospels. Dealing with some practical issues Matthee’s refrain is, “This is a hard teaching of Jesus, but it is not complicated.” This lies at the heart of the challenge of Jesus. To hear this lecture on YouTube, Click here. Keith Matthee obtained his BA LLB at the University of Natal and a Bachelor of Divinity degree from Rhodes University, majoring in New Testament Studies and Hellenistic Greek. Since 1991 he has served in an adjudicating role in various forums, including serving as an arbitrator, a presiding officer in the Industrial Court, an assessor in the Labour Appeal Court, and on a number of occasions as an Acting Judge in the High Courts of Port Elizabeth, Grahamstown, East London, Mthatha, Cape Town and Gauteng. He has appeared in all the courts of South Africa, including the Constitutional Court and the Supreme Court of Appeal. In 2002 he was appointed as Senior Counsel by President Mbeki. In 2007 he relocated from the Eastern Cape to Cape Town and for a number of years was a member of the Cape Town Bar. At present he is researching philosophical and ethical issues related to the Bill of Rights. He is the author of several books.

This talk will show how and why a belief that God exists cannot be a matter of faith, but rather a matter of metaphysics. Francis will offer a compelling metaphysical demonstration of the existence of God. Now available on our YouTube channel. Francis Williamson is a lecturer in Philosophy and is currently head of department of the Department of Philosophy at Rhodes University.

A Glimpse of God: Malcolm Hacksley

Come and listen to an online reading of a selection of hymns and poems, from Tatamkhulu Afrika’s ‘Glimpse of God’, a Mystical prayer, to Chris Mann’s ‘Black socks’, a dramatic monologue with death. Now available on our YouTube channel. Malcolm Hacksley is an author, translator and historian. He is a former director of the National English Literary Museum (now Amazwi) in Makhanda, the world’s premier repository and research resource for anyone interested in South African authors and their writings. With Don Maclennan, he co-compiled A Ruthless Fidelity: the Collected Poems of Douglas Livingstone, a comprehensive collection of the poetry of Douglas Livingstone. Programme

A week of Guided Prayer: This was led by a group of prayer guides trained in Ignatian Spirituality. Initial session Sunday 11 July 16h00. Retreatants arranged meeting times thereafter with their guides.