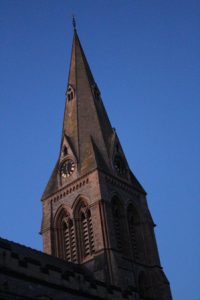 The Cathedral of St. Michael and St. George is the home of the Anglican Diocese of Grahamstown in the Eastern Cape Province of South Africa. It is situated at the intersection of High Street and Hill Street, Grahamstown.

Cathedrals are exciting places. Full of history and atmosphere, they draw you in to marvel at their size and grandeur, the colour of glass and vestment, the sound of music and silence in quiet corner and peaceful chapel. The Grahamstown Cathedral is no exception. A beautiful building, its spire is a beacon of hope and love. It’s a place of pilgrimage for many thousands each year, seeking something different. Why not come yourself, and find yourself inspired and renewed to face the challenges of life? To say a quiet prayer for someone for whom you’re concerned? Come, and receive hospitality to feed body, mind and soul, and a blessing to send you on your way.

The Cathedral is open to visitors from 9 am to 3 pm, Monday to Friday and 9 am to 12 noon on Saturdays. 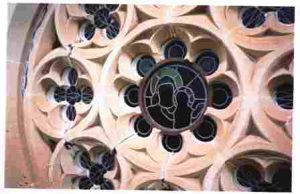 Like most cathedrals across the world, Grahamstown Cathedral has grown out of a much simpler building over a long period of time. The surveyor who laid out the original plan for Graham’s Town in 1814, identified the site as being “a very convenient site for a church”, but it was not until the arrival of the 1820 Settlers that the Governor, Lord Charles Somerset, sought support from the British Secretary of State for War, Lord Bathurst, for “a British Population of upwards of 3 000 persons (including the Military) totally destitute of any place of worship whatsoever.” The Society for the Propagation of the Gospel (S.P.G.) and the colonial treasury found the £4,404 15s required to pay for the construction. Plans were drawn by W. Jones of Cape Town, building began in 1824 and St George’s Church opened in 1830. At that time, South Africa was served by the Bishop of Calcutta, hence there were no cathedrals in the growing colony. Robert Gray, the first Bishop of Cape Town, whose wife played a major role in designing churches, visited Grahamstown in October 1848, observing, “Church well situated, but miserable in point of architecture.” John Armstrong, the first Bishop of Grahamstown described the exterior of the church as “plain and uninteresting in the extreme … I do trust I may be spared to see a better and worthier structure reared as our cathedral.” The establishment of the Diocese of Grahamstown coincided with the Gothic Revival which dominated church architecture for the rest of the century. Sir Gilbert Scott, succeeded by his son John, designed the new Cathedral. To ensure that the lighting in the building conformed to that in English cathedrals, the Gothic windows were made slightly narrower than normal.

The nave was built before the chancel. The photograph below was taken in 1890, on the occasion of the laying of the foundation stone of the chancel by the Governor, Sir Henry Loch. (From Loch, Henry Brougham – 1827-1900- the Martin Plaut collection.)

The spire, for many years the tallest building in the country, was completed in 1879 and, once a major dispute between the Dean and the Bishop was settled, the Cathedral was dedicated to St Michael and St George. The building was completed in its present form in 1952 and extensive repairs to the exterior undertaken in 1986. 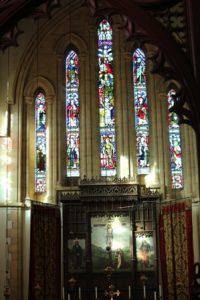 The stained glass windows are priceless, though valued at R20m. Most have been in position for well over 100 years and their leading has eroded, making them unstable and in need of continuing restoration. For photos, click here.

Restoration work on the South windows was carried out in 2017 by David Manning. For a summary of his work, click here.

The first ring of bells to be installed in Africa was hung in the Grahamstown Cathedral tower in 1879. The bells, an octave cast by John Warner and Sons in London, were supplied complete with fittings and with a frame of English oak. More…

For a multi-media preseentation on the Cathedral bells, click here.

The Cathedral Clock was installed in the old tower in 1873, and re-installed after the present tower was built, in 1879. The clock is now operated using electricity, rather than a clockwork mechanism. More…

In 2008 a restoration fund was established for repairs and restoration of the stained glass windows and the organ.

Donations for the restoration fund can be sent to

or by post to:
The Cathedral Parish
PO Box 102
Grahamstown
6140
South Africa.