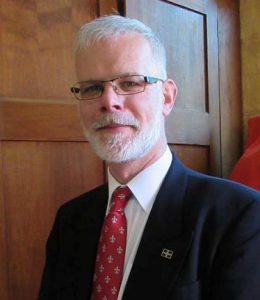 Cameron Luke, Cathedral Director of Music, was born in Cornwall, England. He graduated with a BA (Hons) in music from Oxford University in 2004. During his studies he was Organ Scholar of Worcester College. This involved directing and overseeing the day-to-day running of the chapel music with its two choirs. His other musical qualifications include a Diploma in Choral Direction from the Royal College of Organists, and in 2012 he received his FRCO (Fellowship Diploma from the Royal College of Organists.)

Cameron has worked outside the UK previously, having served as an organist at two different churches in Norway between 1997 and 2001. He has extensive experience of working with young people at schools in Cheltenham, as well as with students at Oxford University.

Cameron has appeared as organist in BBC TV ‘Songs of Praise’ programmes and as soloist in several performances of music for organ and orchestra with the Cheltenham Symphony Orchestra.

He has a wide range of interests which include organ construction, choral conducting, composing, campanology, history, theology and liturgy, the study of academic dress, archaeology, walking, politics and current affairs.

He served as Director of Music at All Saints’ Church, Cheltenham, in the UK, from 2007 – 2018, and arrived to take up his duties at Grahamstown Cathedral in Holy Week, 2019.