Music is an extremely important part of the life and worship of Grahamstown Cathedral. 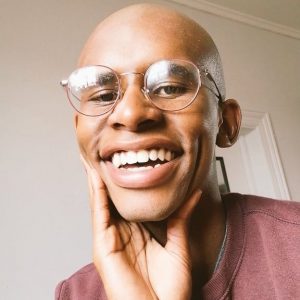 Kutlwano Kepadisa was appointed Director of Music and Precentor of the Cathedral in January 2021. Kutlwano (known as Kepa) had been acting as Director of Music for some months, and was also in charge of the Cathedral music for two years from 2017-2019, after the departure of Dr Andrew-John Bethke. Trained initially by Dr Bethke as a Choir Intern, Kepa has worked tirelessly to develop his talents as a choir director, and to inspire and bring out the best in the choristers. 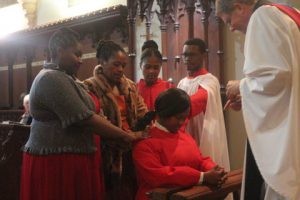 Kutlwano Kepadisa rose to the challenges of repeated lock-downs in 2020 and 2021, and the Iimvumi (junior choristers) continued to sing whenever the Cathedral was open for worship. New probationers were recruited and trained. Some adults augment the numbers. Read more details in the Report for 2020-2021 by Choir School Chairperson Glyn Lloyd-Jones.

The Makana Choir School offers scholarships towards young people attending local government schools, who are members of the Cathedral Choir. This scholarship scheme is funded by donors, both corporate and individual. Read more…

The Cathedral organ  was built by Bevington of London in 1860 and installed in a gallery at the west end of the nave. In 1893, it was moved to its present position above the chancel, and in 1905 “restored and enlarged.” More …

Jonathan Hughes has been an Organ Scholar at the Cathedral since 2020. He is studying towards a BMus at Rhodes University. His organ lessons are provided by the University. He and Bayanda Mthetho (see below) both play regularly for services in the Cathedral. The Senior Organ Scholar receives a modest scholarship from the Makana Choir School towards his academic expenses. More recently Jon has  also been appointed the Choir Assistant, a separate part-time post which involves assisting the Director of Music with many of his duties.

Bayanda, who was a member of the Makana Choir School, began piano lessons at the age of 11, and at the age of 15 passed the Grade 8 Trinity piano exam, with the astonishing mark of 97%! The following year, in 2019, he took the Trinity Licentiate in piano, which he passed with Distinction. Bayanda began learning the organ with Dr Andrew-John Bethke while he was Director of Music. After Dr Bethke left, he took organ lessons during 2018 and 2019, and again in 2021, funded through the generosity of a group of private donors. During 2020 he was taught by the then Director of Music, Cameron Luke. Having passed Matric at the end of 2021, Bayanda has now started his BMus studies at Rhodes University. He continues to play the organ at the Cathedral.

This video clip of Bayanda playing part of Bach’s Prelude No 5 in G Major was recorded at a service on 25 November 2018.

Makana Choir School was featured in an episode of the religious programme Slice of Light, which was broadcast on SABC2,  on Sunday 5 August 2018.  This included short interviews with choir conductor Kutlwano Kepadisa, and two of the junior choir boys at the time, Xolisa Foley and Junaid Douglas. The programme can be downloaded from YouTube. 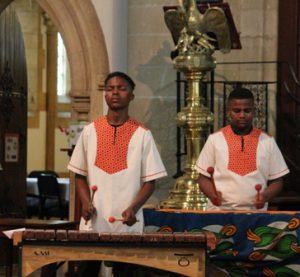 For more than ten years groups of marimba players took part in Cathedral services. Penny Whitford, an experienced music teacher who retired to Grahamstown from Gauteng, put a great deal of work into training a number of groups of marimba players of all ages. Subsequently the St Michael’s Marimba players, all young people, were taken over and conducted by Asakhe Cuntsulana, a music student at Rhodes, and continued to go from strength to strength. The group performed regularly on the National Arts Festival over more than a decade, and their performances were always popular.

Listen to a variety of Video Clips of the Cathedral Choir and Marimbas, among others!
See a list of our CDs