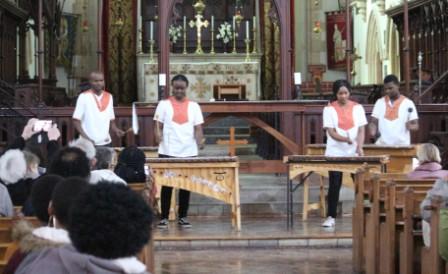 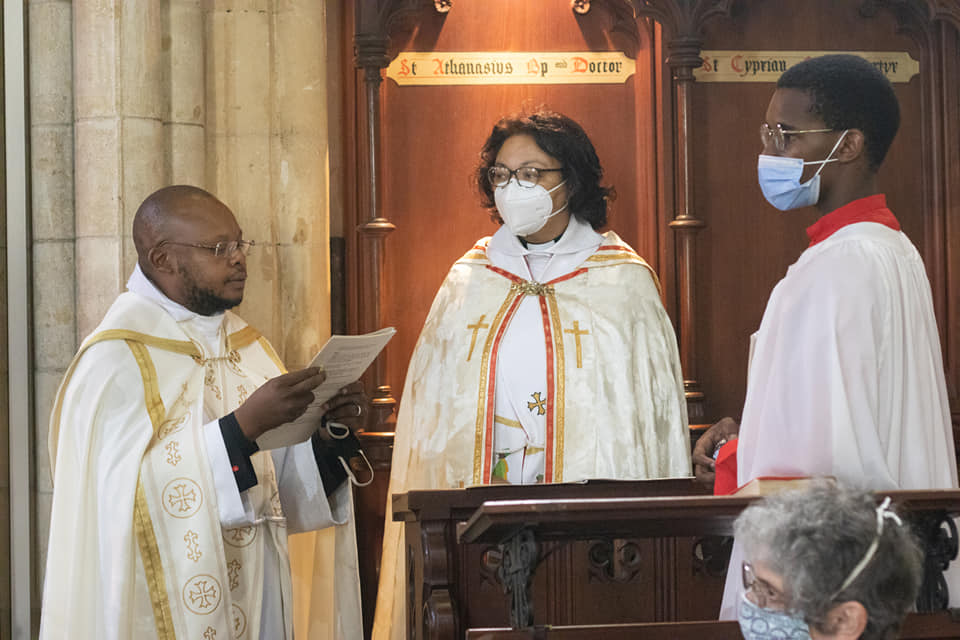 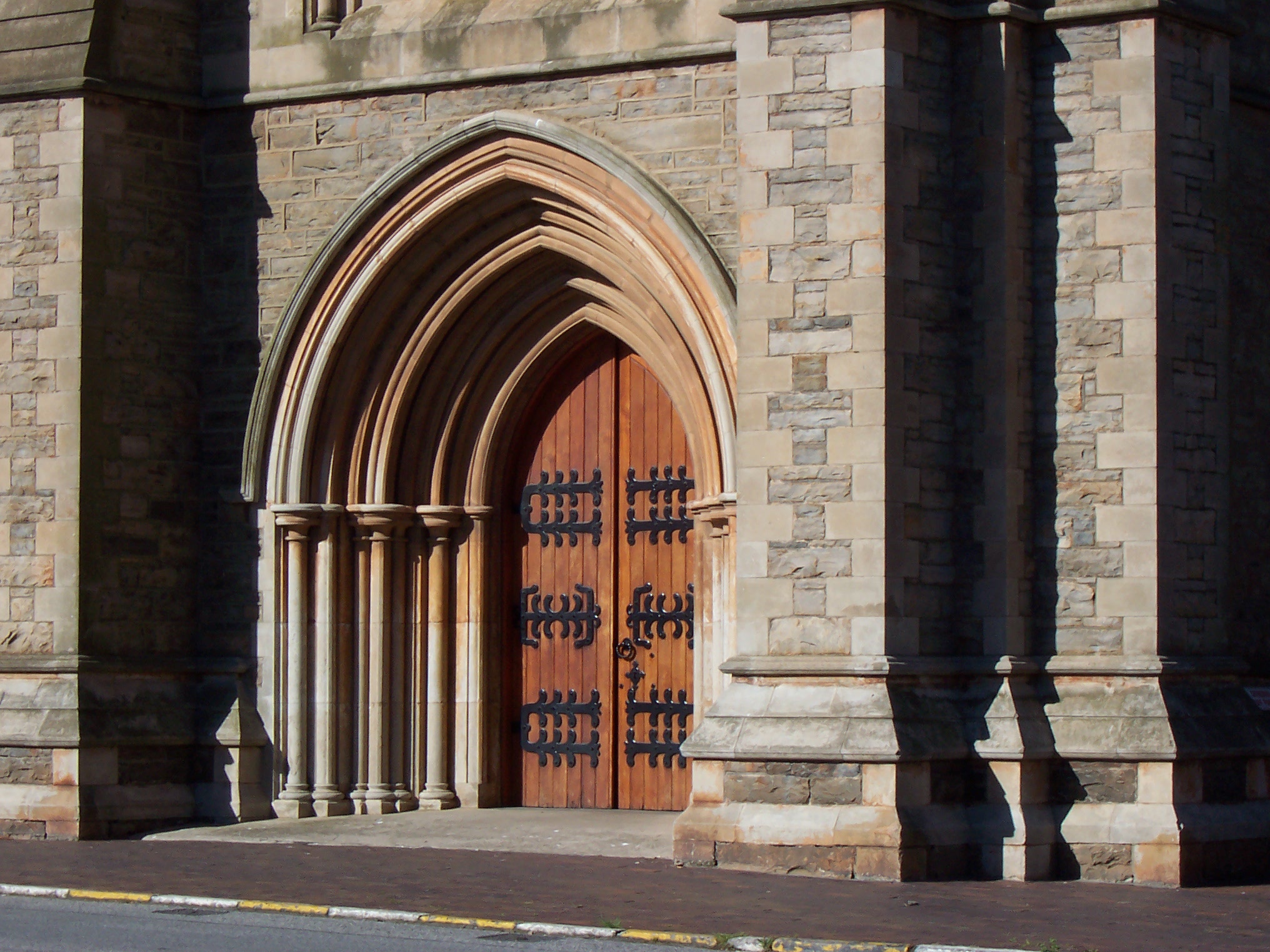 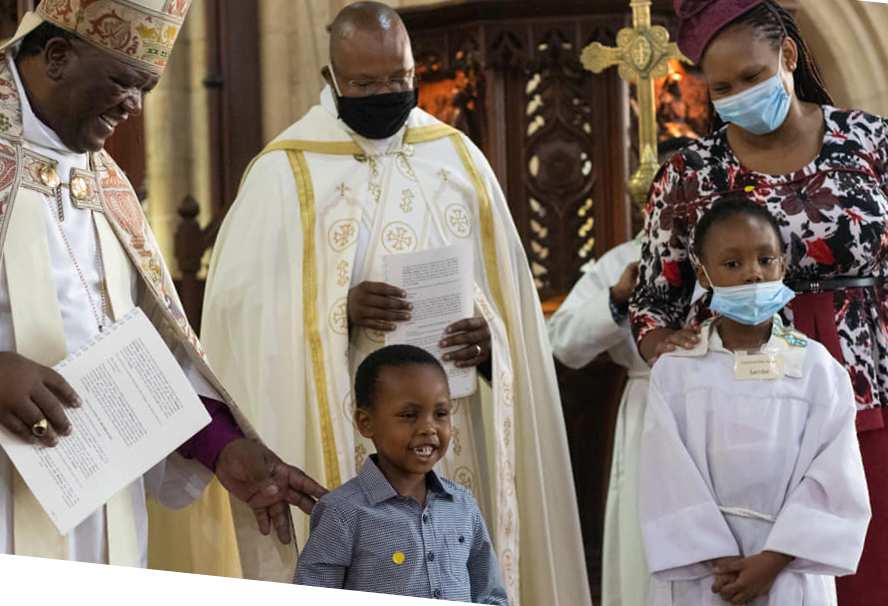 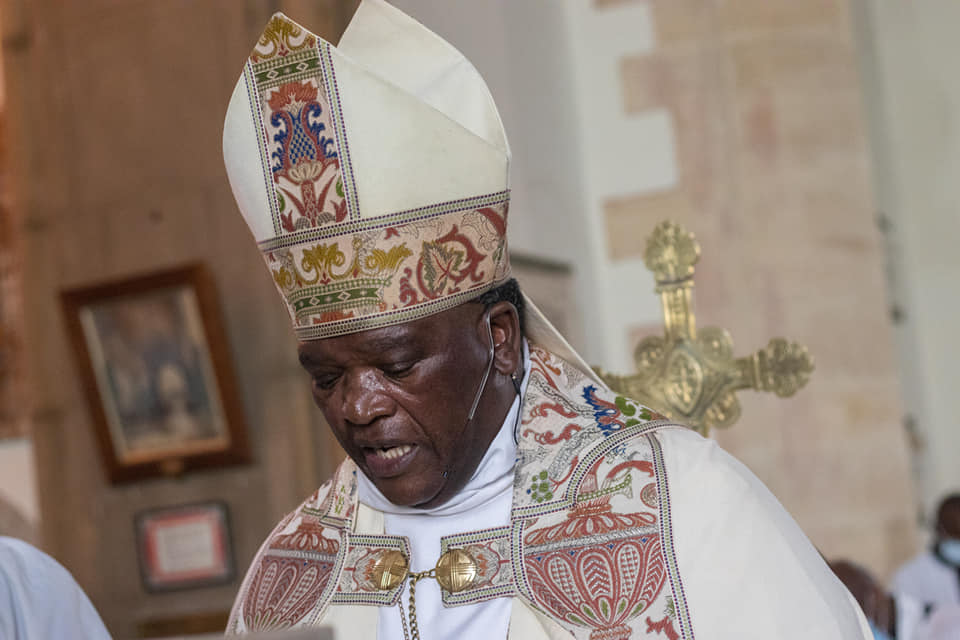 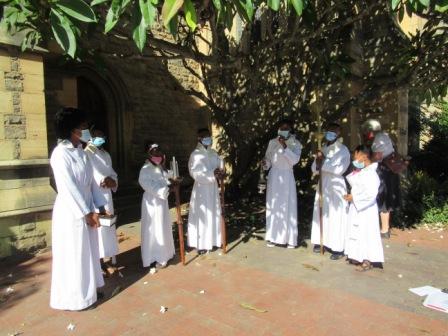 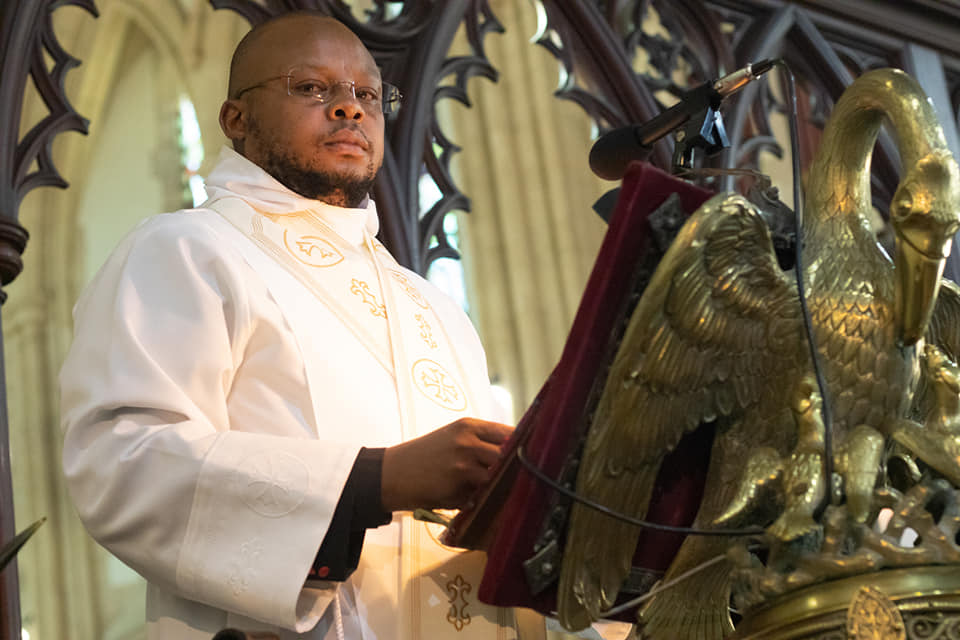 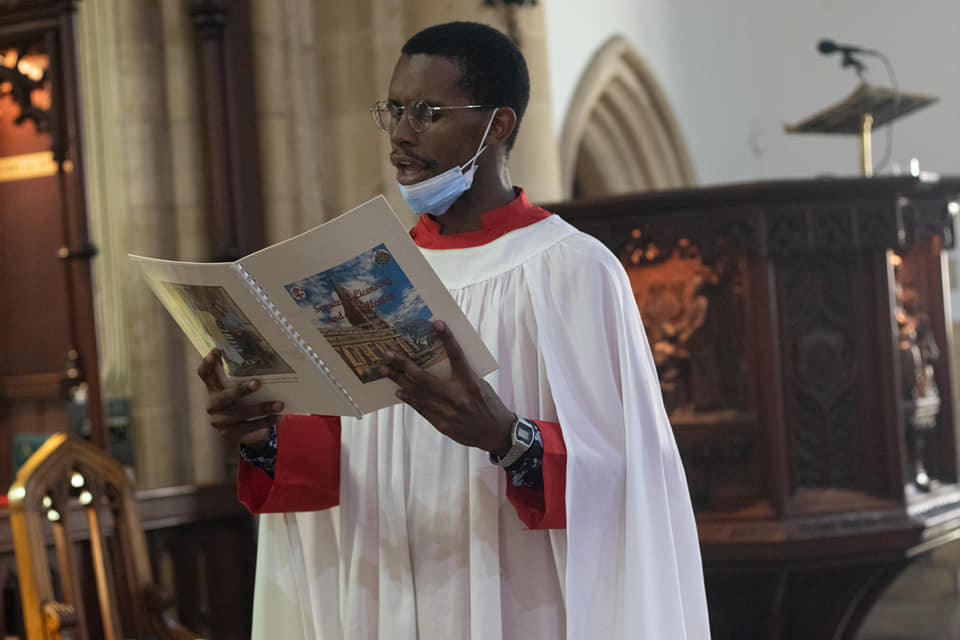 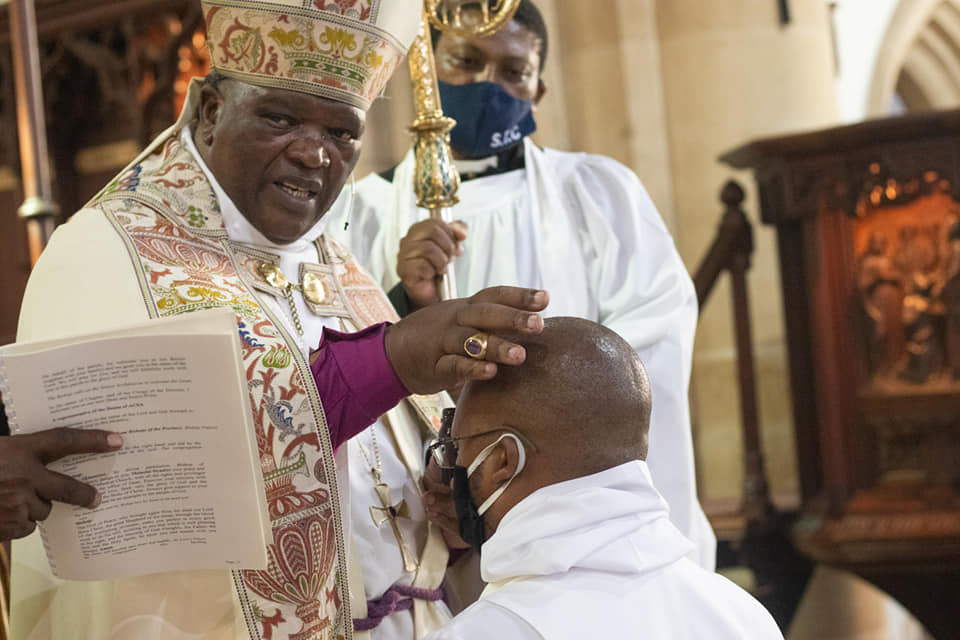 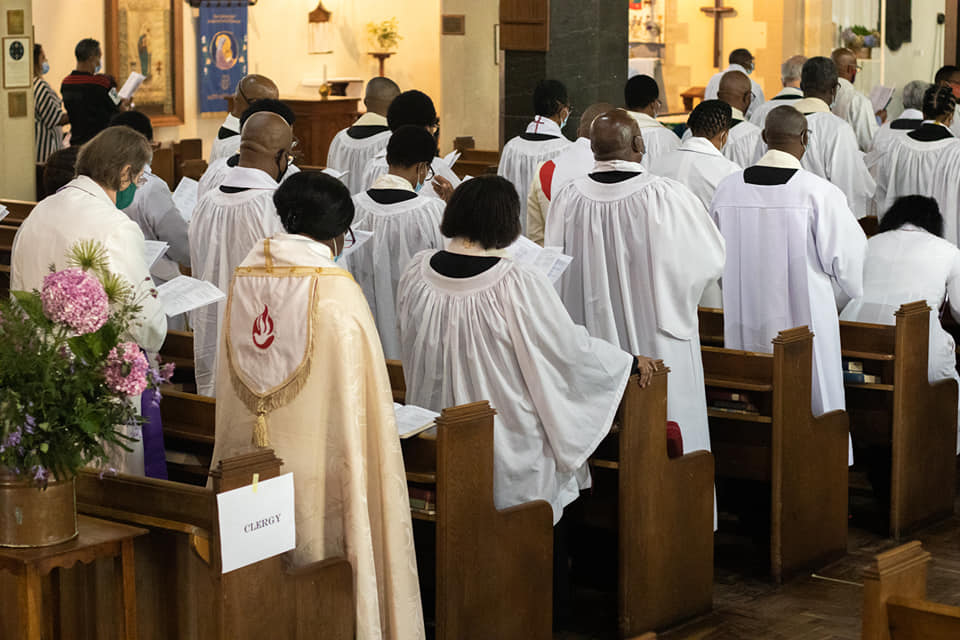 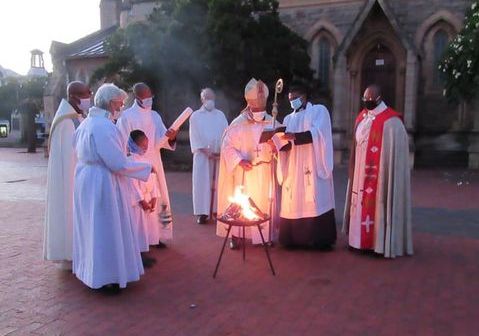 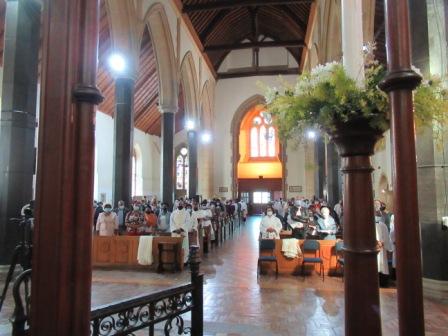 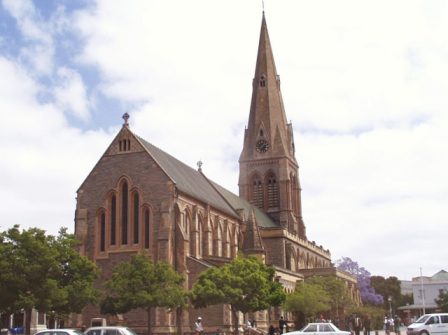 Come in, browse around, make yourself at home! From contact details of the Cathedral staff to lists of forthcoming Sunday services, interesting information about our beautiful building, and lots of news (and archived news) of People and Places connected to the Cathedral family – it’s all here. Click on ‘Videos’ on the side menu to hear some of the music of Grahamstown Cathedral.

For the 69th time the Rotary Club of Grahamstown presents Carols by Candlelight in the Cathedral, on Thursday 1 December 2022 at 7 p.m.

On the evening of the First Sunday of Advent, 27 November, the Cathedral Consort presented a service of Advent Carols. They sang the traditional Advent Sentences, each of which begins with “O…”. Listen to them singing “O Rex Gentium“. Among unusual Advent carols they sang ‘E’en so, Lord Jesus, quickly come‘ by Paul Manz, and ‘Bethlehem Down‘ by Peter Warlock. The Consort was directed by the Cathedral Director of Music, Kutlwano Kepadisa, whose hair was appropriately coloured for the season!

The Cathedral Parish Councillors were admitted to their office by Dean Mzinzizi Dyantyi on Sunday 20 November at the 9:30 Eucharist Service. They promised to serve the parish faithfully, were anointed and prayed for. 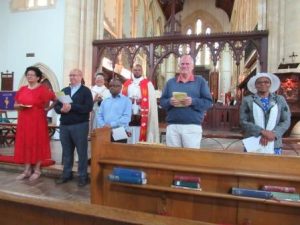 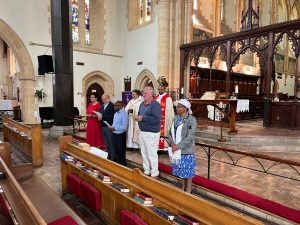 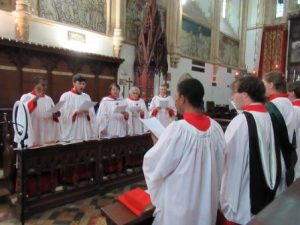 On Sunday evening, 13 November, the Cathedral Consort sang a Choral Evensong in remembrance of those who have died in war. The The Canticles were by Thomas Weelkes (Magnificat and Nunc Dimittis), and the Responses by Smith of Durham. The Anthem was ‘Greater love hath no man’ by Anne Dudley. For further recordings, see our Video page.

The preacher was John Jackson, whose thought-provoking homily can be read here.

Mothers’ Union Day of Prayer for the Clergy 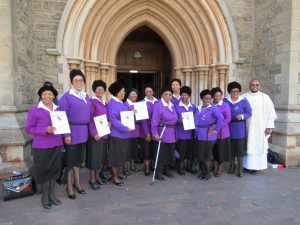 Sunday 6 November saw the Mothers’ Union of Grahamstown Archdeaconry honouring their clergy with a Day of Prayer in St George’s Hall, Makhanda. At the 9:30 service in the Cathedral a number of MU members were presented with Certificates for having served 25 years – or longer!

A gathering followed for prayers, music and song in the beautifully decorated Hall, in which parishioners joined with the clergy and MU members. The keynote speaker was the Diocesan MU President, Mama Anna Mangaliso. The meeting concluded with a delicious lunch. More pictures can be seen in our Gallery. 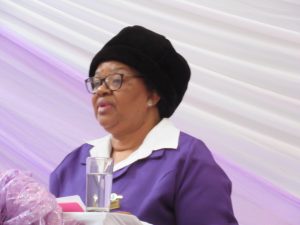 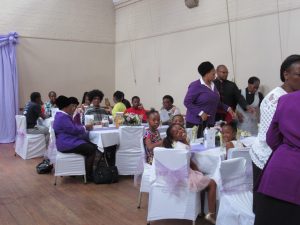 The Makana Choir School AGM on Sunday 16 October was attended by 15 choristers and parishioners, who stayed after the 9:30 Eucharist service. The following were elected to the Choir School Committee: Chair: Glyn Lloyd-Jones; Secretary: Jessica Lloyd-Jones; Parent Representative: Phumla Cagwe. Cathy Meiklejohn kindly agreed to combine the roles of Treasurer and Fund-raiser for the time being, until she has trained a new Fund-raiser to take her place. Also elected to the Committee were the Revd Melany Adonis and Jonathan Hughes. Maggy Clarke, who had been Secretary of the Committee since the inception of the Choir School in 2009, stepped down from the Committee and was warmly thanked. The following are ex officio Committee members: The Director of Music (Kutlwano Kepadisa), the Dean (Mzinzisi Dyantyi), the Choir Chaplain (the Revd Siphokazi Njokweni) and the Head Choristers, who at present are Ambesa Cagwe and Siyolise Sandi. To read Glyn Lloyd-Jones’s Chairman’s Report, click here. 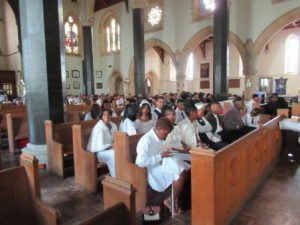 We waited so long! Now, we praise God, the Cathedral was again able to host an Archdeaconry Confirmation service. On the afternoon of Sunday 11 September 2022 Ebenezer Ntlali, Bishop of Grahamstown, confirmed candidates from the parishes of St Augustine’s, St Clement’s and the Cathedral. Some of the candidates had begun their Confirmation Preparation in 2020 – but then Covid intervened! 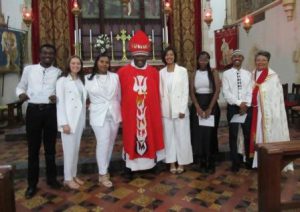 Michael Whisson, a former Churchwarden and Lay Minister at the Cathedral, who recently moved to Cape Town with his wife Adrienne, died on Sunday 14 August. We give thanks to God for Michael’s life of service in many fields, academic, civic, and in this Cathedral. Prayers are asked for Adrienne and all his family.

On leaving the Cathedral parish, Michael had made a point of following our former Chancellor of the Cathedral, Claire Nye Hunter, and joining her congregation at St Thomas’s Rondebosch. So it was Claire who ministered to Michael and the family during his last days. A Requiem Mass for Michael was held on Wednesday afternoon, 24 August at 14h30 in St Thomas’s Church. The Archbishop of Cape Town, the Most Revd Thabo Makgoba, presided, and the preacher and officiant was the Revd Dr Claire Nye Hunter. The service was live-streamed, and can still be accessed at https://www.facebook.com/groups/345127422184986

Our enterprising Cathedral Organ Scholar, Jonathan Hughes, has been inspired by the number of interesting and historic pipe organs in the city of Makhanda, and has arranged a series of recitals with short talks, to take place on alternate Saturday afternoons.

The first afternoon of the ‘Organ Crawl’ series on Saturday 20 August was a tremendous success. Despite cold weather and pouring rain, an interested crowd turned out to visit the 1872 Gray and Davison organ in St Bartholomew’s Church and the pre-1837 Hill chamber organ in Wesley Church. They heard the history of the instruments, and enjoyed short recitals by Christiaan Carstens, organist of the N G Kerk in Humansdorp, retired Professor Albert Troskie who has written scholarly works on the organs of South Africa, and Jon Hughes himself. 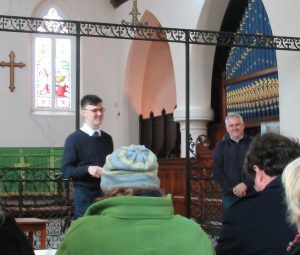 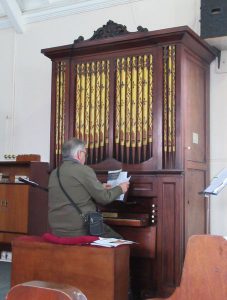 The next episode of the Organ Crawl took place on Saturday 3 September, beginning at the N G Kerk and continuing at Trinity Presbyterian Church. 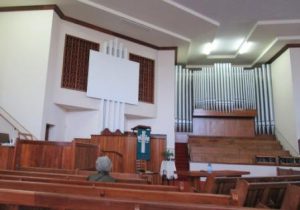 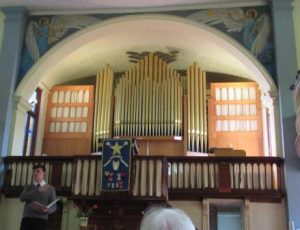 We believe we are called to be a vibrant, attractive, diverse, welcoming, all age community of people who seek to follow Christ.
The Cathedral’s ministry seeks at all times to be obedient to the call of God through Jesus Christ.

to the Cathedral ministry

If you would like to make a promise to contribute regularly to the ministry of the Cathedral, you can download a Pledge Form here.

Archbishop Thabo Makgoba has issued the following Pastoral Letter to be read in parishes ahead of the UN’s International Day of Solidarity with the Palestinian People (29 November 2022).

Dear People of God
At the annual meeting of the Church’s Provincial Standing Committee (the PSC)
this year we resolved to:
“Request all parishes… to highlight the plight of the Palestinian people on the Sunday before Advent yearly, in line with the International Day of Solidarity with the Palestinian People on 29 November.” Read more…

The Anglican Church of Southern Africa (ACSA) acknowledges the anger of some in our schools who have once again challenged the church to face the pain of experiences of racism and of feeling that they do not belong. read more…

From the Bishop of Grahamstown

The 2021 Anglican Ablaze Conference took place from 6-9 October. For YouTube recordings of the sessions, including an address by the Archbishop of Canterbury, Justin Welby, click here.

For further publications of the ACSA and the Diocese of Grahamstown visit our Publications page.